We are a community theater in the heart of Beaver County, PA since 1992.  The Segriff Stage is ready for our first show in July 2022. Whether you are a performer or patron, you don't want to miss out!

2022: Premiere Year
This year we're celebrating our premiere at the Segriff Theater.

After 30 years, we finally found a home and are excited to be performing after the COVID hiatus. Won't you join us on the stage or in the audience? 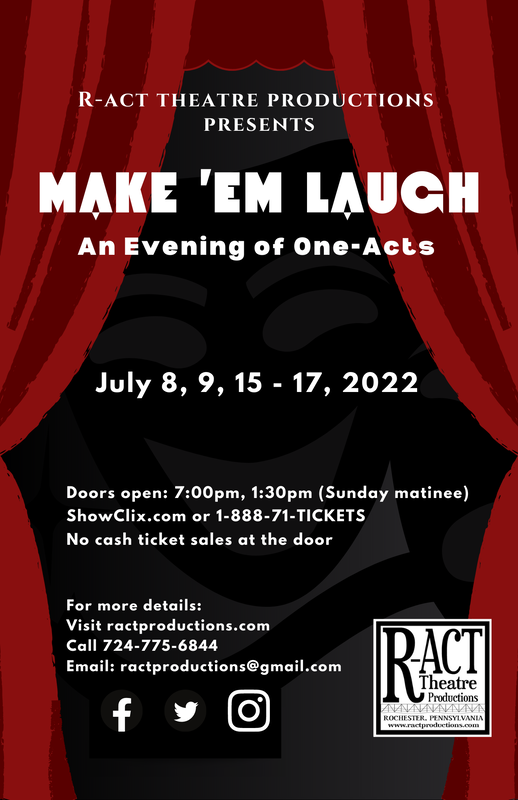 Join us for an evening of three one-act comedies. In "Who's Afraid," the Wolf appears on a TV talk show to tell his side of the story. In "Nik of T.I.M.E," a time agent travels back from the future to right a mistake. And in "The Pitch," to wannabe screen writers get the chance to pitch their movie idea to a big Hollywood producer. These three one-acts have previously been performed as part of the Pittsburgh New Work Festival and are now receiving their Beaver County premiere.

Auditions will be announced within 10 weeks of the first show

** This show is available for your next fundraiser. See details below

It is 1952, and on the set of the hit television show, "That's My Suzy", all seems comedy as usual. As usual, that is, until the show's producer meets with a fatal accident... or was it? Did one of the cast or crew arrange the producer's cancellation? It is up to the audience to help solve the crime. This is the world premiere of this audience-participation murder mystery.

Mr. "Poppy" Popovich, manager of a small town radio station, has a special assignment for his staff - produce an old-fashioned Christmas variety show to be broadcast live on Christmas Eve. Along willing and able, his staff soon realizes the truth that if something can go wrong, it will. It's a R-ACT's holiday radio show about a holiday radio show.
Visit the Broken Leg Gallery for our past performances

**Murder Mystery Dinner Theater
Hire R-ACT for your next fundraiser!

What a great fundraiser idea!